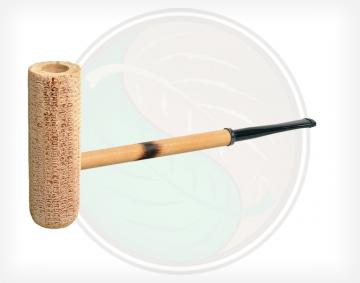 The MacArthur Classic Natural Corn Cob Pipe from Missouri Meerschaum is a large pipe similar to the iconic pipe smoked by General Douglas MacArthur himself. Based on an old design from the late 1800s, this pipe has a very deep bowl and a long stem for an extended, cool smoking experience.

The MacArthur Classic Natural is available only as a straight, unfiltered pipe with a black bit. This pipe is great for smoking, but can also serve as a conversation piece sitting in a place of honor on the mantle. Call it a quirk if you will, but the General would burn a ring around the shank on every new pipe he received. When President Truman relieved MacArthur at the end of World War II, hundreds of sympathizers besieged us with orders for the iconic 5-Star MacArthur Corn Cob Pipe, and MacArthur’s creation became a legacy. Today we still burn a ring around the shank in his honor.

"I received my tobacco order today and just wanted to say thanks for a prompt delivery. The leaves are really nice looking and the packaging was excellent. "