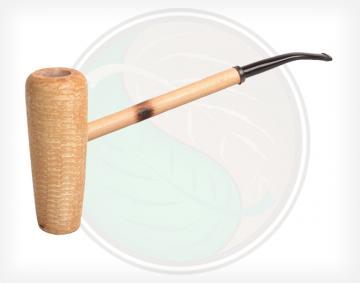 The MacArthur 5-Star Polished Bent Corn Cob Pipe from Missouri Meerschaum has a more finished appearance version of the 5-Star Natural. Consequently, it is not historically accurate (but we like it anyway). Its shortened tobacco chamber and extended shank lend itself to an easy smoke, and the bowl extension makes for a great grip! Perfect for armchairs and leisurely afternoons. It comes unfiltered with a bent black bit only.

"Ps .... Monique, your great lol and you really have fabulous customer service "